The people should preach the word of God to all peoples according to the Biblical Great Commission (Matthew 28:19-20).

A Christian not for profit organization in Kenya based in Eburru, Kenya. It’s mainly involved in trying to better the lives of the people of Eburru, through the use of the Christian faith, better Education and good HealthCare and anything else that can help. 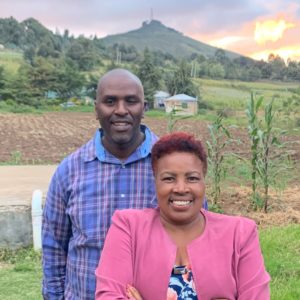 Camp Brethren was founded by Pr. Steve Njenga (former Chaplain AIC Kijabe Hospital) together with his wife Mary (former OR manager Kijabe Hospital) after they came to Eburru in 2004 with a missionary team from Kijabe hospital. They saw the poverty in the community which left them really disturbed and always thinking about the people of Eburru. It is then that they decided to leave their comfortable life in Kijabe and spent most of their money and time (on weekends) trying to help the people of Eburru. And this way Camp brethren was born. The name Camp came from the camping way of life they operated in, sleeping in tents and Brethren for the many brethren from far and wide that came to help out in the camps together with them. They planted a church and later on a medical Centre and finally a school in their efforts to empower the people. Many from the community have benefited from Sponsorships and scholarships channeled through the program. Countless lives have given their lives to Christ. The general public has also benefited from the quality low-priced services offered by Camp Brethren Medical Centre and Schools.

On the ground is Mary Njenga who also works as the Director/Administrator for both schools, helping administer the facilities.

The school is also headed by the capable: Josephat N Wanderi – Headteacher
Senior teachers and subject teachers who make sure the school runs well and kids are attended to.
There is also a team of Non-Teaching staff who play in the shadows to make sure everything goes on well. We have able and well-equipped Cooks, Chefs, Security personnel, accountants, IT Personnel and caretakers.

What We are about:

“To be a strong, integrated entity in mobilizing and equipping the whole person for church evangelization.”
The people should preach the word of God to all peoples according to the Biblical Great Commission (Matthew 28:19-20).

John 10:10 – “The thief comes only to steal and kill and destroy. I came that they may have life and have it abundantly.”

Steve came to Eburru for the first time with a mission team From Kijabe Hospital. They came to a village down the mountain by the Lake Naivasha and whilst they were there, Steve looked up the mountain and he asked are there any people living up there? And he was told yes, there’s a small settlement called Eburru up the mountain.

So, the following year Steve being in charge of missions planned for a mission trip to Eburru. They came and served the people of Eburru even did a medical camp. The villagers seemed really needy and Steve felt very sorry for them.

In 2004 there was no planned Mission trip. Steve decided to return by himself. What he saw this time round was heartbreaking, Eburru was on its knees, with Drought and famine that had struck after failed rains and agriculture being the main support of the community it was bad.

Steve returned to Kijabe with a big load in his heart, He told Mary about it and they tried to get handouts and donations from friends to take back to the people of Eburru.

He was too pre-occupied with the plight of the people of Eburru and how to help them that eventually he quit his job as a Chaplain in Kijabe Mission Hospital (His wife Mary still kept her job as bills had to be paid). He started a makeshift church tent in Eburru Secondary fields, later they purchased a piece of land and built a church, they bought another piece of land where they made a ‘CAMP’ which was a base of operation for Steve and Mary when they were in Eburru, they went on to add a medical clinic to this piece of land and kick started a school. It was not long before the school was overwhelmed with kids and they had to find another piece of land for the school.

It was then that they met some friends from the US who had come to Kenya for a mission trip. On this mission trip they had tons of activities that they helped Steve with. But whilst carrying out their missions, something bothered the friends. There was a particular group of children that always followed them around. They had big smiles but spoke little English if any. They asked Steve, ‘How come these kids are always around even on school days? Aren’t they supposed to be I school?’ Steve responded and explained that the kids were from parent who either were so poor and ignorant about education.

Then they asked, ‘what can be done to help them?

Steve’s response; he pulled one kid from the group. He was untidy if not tattered clothing. He pulled up his sleeves and his arms had crusts from not washing. So Steve said ‘Look at this boy, If something needs to be done, it needs to be done now.’

And there without knowing it He had planted a seed. And when these friends went to the US. They could not stop thinking about the boy and his friends, the boy’s name was David. The friends Decided to start an organization to help mobilize funds and help to aid the boy and his group as well as Children in a similar situation like his in Eburru. Thus, David’s Hope International (DHI)was born. And since then DHI has never looked back and has since partnered with CBM to make Milestones that surprised even themselves.